Sony has unveiled what has been described as "a big secret" in the form of its Vision-S electric vehicle (EV) launched at the Consumer Electronic Show (CES) this week.

The Japanese electronics giant claimed that he had built the car to show his autonomous driving and in-car entertainment systems and did not confirm whether he intended to produce the model.

Sony has been interested in car technology without drivers for a while. In 2015, the company threw their sensors at car manufacturers at CES. And it took an interest in the Japanese company ZMP that developed driverless tech.

The Vision-S shows imaging and detection technologies that contribute to safer and more reliable autonomous driving, with cameras and LiDAR creating a 360-degree "safety cocon" around the vehicle. 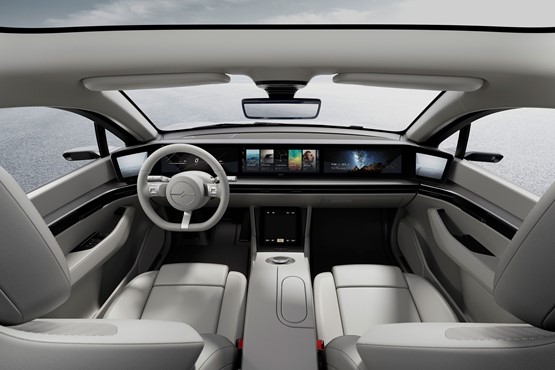 A total of 33 sensors are mounted on the car, including sensors that can detect who is in it and adjust their in-car entertainment services.

David Bailey, professor of business economics at the Birmingham Business School, believes that the car can be more than a showcase of Sony's technology and a signal for a newcomer in the autonomous EV sector.

Bailey said to AM: "It is still unclear whether Sony is planning to make such a car or whether it is a vehicle to show car manufacturers what great technology they have – especially sensors – to sell to the industry.

"I think this is the latter, but the reservation is that they have put a lot of effort into a list of important players such as Magna Steyr."

Can Sony make an electric car?

Bailey pointed out that Sony has a turnover of US $ 80 billion per year, making it larger than many car manufacturers.

And with the Vision-S, it has indicated that it has technology to potentially create a rival such as Jaguar Land Rover (JLR) and BMW, which announced a partnership that they would collaborate to help them develop the next generation of electric vehicles (EVs # 39; s) in June last year.

Bailey said: “(Sony) could pay the capital costs of making cars if he really wanted to. The company has collaborated with a list of major automotive and technical players to develop the car.

“My guess is that Magna Steyr will have developed much of the car with Sony and other technology involved and Magna will actually have built it.

"That can be a good way for Sony to enter the market if the decision – with other players to develop cars and outsource assembly – to avoid some of the challenges that Tesla faces.

"Sony can be a major disruptor, it has been decided to follow this route."

Although no potential price or specification data was available for the Vision-S concept that C CES unveiled this week, Sony has confirmed that the car is powered by two electric motors with a combined capacity of more than 500 hp.

The Vision-S revealed yesterday (January 7), Sony CEO, Kenichiro Yoshida: "It is no exaggeration to say that Mobile has been the megatrend of the past decade. I believe that the next megatrend will be mobility."